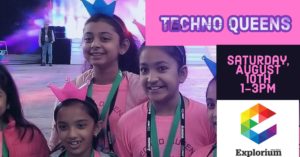 The Techno Queens  is an all girl FIRST Lego League (FLL)* Team and were among the top team in Long Island and going onto compete in FLL World Invitational. Last year, they went on to win the Top Award in FIRST Jr FLL World Championship held in Detroit, Michigan.

Over the next 2 Saturdays, guests of the Explorium will be introduced to EV3 Mindstorm, key brick functions, learn to make a basic robot - with motors. Explore good designs for making stable robots; learn and use various sensors (Color, Touch, Gyro, Ultrasonic. Do fun hands-on missions with kids on last year's missions from FIRST FLL.

*The First Lego League is a robotics competition for 4-8 grade and the Techno Queens will come to us to demonstrate the robot solving challenges on the playing field.

Suitable for all ages including younger guests but especially suited for ages 9-13.