Field of the Month: Physics 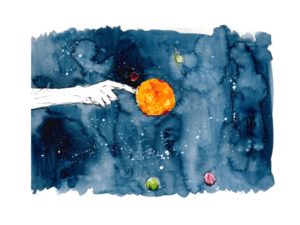 Welcome to the Long Island Explorium blog! Each month, the Field of the Month blogs will reflect the theme featured in STEM WonderLab, our monthly subscription box, which comes filled with a variety of at-home experiments, access to a Google Classroom so you can chat with Explorium Educators, access to a live Zoom workshop session, and infographics on different underrepresented historical figures in STEM. While the contents offered in the STEM WonderLab box are only available to those who subscribe, our blog, and the resources that accompany it, will be open to everyone!

Curious STEM explorers will be able to dive deeper into the set theme, learning about some of the major branches in each field, what scientists from that field can do, how they can begin their path towards this career, and even find additional educational resources, like interview videos featuring real-life scientists from the If/Then Collection or I am a Scientist. We hope that this space will inspire more young people to pursue a future in STEM and help those already on their educational/career paths but may feel a bit lost on what direction they want to take. Continue reading to learn about the first field that we’ll be discussing: physics!

The word physics comes from the Greek word physikḗ, which means “the knowledge of nature.” Physics is the science of matter, energy, mass, and force, as well as their motion and behavior throughout space and time. It is one branch of the larger category of Natural Sciences.

What does a physicist do?

Many people who study physics will fall into one of three general roles: theoretical physicists, experimental physicists, and applied physicists. Theoretical physicists develop theories or models that can predict particular events and behaviors and explain how certain aspects of the world work; this could be in any field, from the impossibly small in the quantum world to the gigantic expanses of distant galaxies in cosmology, to anything in between! The experimental physicists then test these theories and models to determine their limits and find other approaches, if necessary. Applied physicists will then take these findings and apply them to real-world settings.

However, these are not the only jobs physicists can have. Some will use their background in physics and apply it to other areas, such as education, climate forecasting, robotics, or medicine. This is called an interdisciplinary field and will be discussed more in the Branches of Physics section. 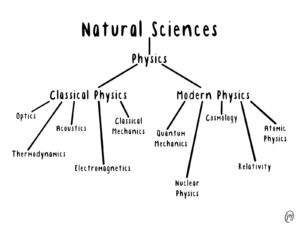 The different areas of physics can be divided into two categories: Classical Physics and Modern Physics. This division is primarily based on when specific topics were developed; those developed before the 20th century are considered classical, while those created during the 20th century or later are considered modern. Each area of study within these two categories can be further divided into smaller, more specialized disciplines described below. Please be aware that, since physics is such a vast field, the list we have provided is not exhaustive and only includes some of the major areas of study. However, more information on these areas can be found in our Resources section.

It is also possible to combine two fields to create something called an interdisciplinary field, as we mentioned above. Some examples include, but are not limited to:

How do I become a physicist?

So you want to study physics. That’s great! Here, we’ve provided some information on a few attributes that can be beneficial to those looking to enter this field, as well as a general education outline. However, it’s important to remember that there is no right or wrong way to become a physicist, nor is there just one path that works for everyone. People learn and succeed through different methods and at different paces, and that’s perfectly alright. Additionally, if you find that you may not have all of the skills listed below, that’s fine too! No one is born with these skills; they are learned and improved upon over many years.

Matter: any substance that has mass and occupies space.

Energy: the capacity of a physical system to perform work.

Mass: the amount of matter in an object; when on Earth, the mass of an object is the same as its weight.

Force: a push or pull upon an object; can cause an object to slow down, remain in motion, or change shape.

Theory: a plausible or scientifically acceptable general principle, or body or principles, offered to explain phenomena.

Model: a representation of an idea, object, process, or system used to describe and explain phenomena that cannot be experienced directly.

Interdisciplinary Field: relating to more than one branch of knowledge.

Newton’s Laws of Motion: created by Isaac Newton in 1686, describes the relationship between an object’s motion and the force acting upon it.

Newton’s Law of Universal Gravitation: created by Isaac Newton in 1687; a mathematical formula that describes the force of gravitational attraction between two bodies, in relation to their mass and distance.

Planck’s Quantum Theory: created by Max Planck in 1900; hypothesized that the energy of light is proportional to its frequency, and the constant that relates them is known as Planck’s constant (h).

Phenomena: an observable, rare, or significant fact or event.

If you’d like to learn more about physics and the historical figures who shaped this field, as well as conduct your own experiments, please consider subscribing to our STEM WonderLab subscription box. Free resources are also included below for those who are unable to subscribe.

Today’s Physicists from Around the World:

Tweets by LongIslandExplorium
Scroll To Top